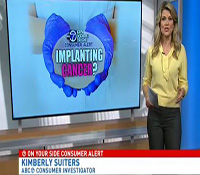 Sinclair Broadcast Groups ABC affiliate WJLA-TV Washington, D.C., investigated a potential link between textured breast implants and a rare form of lymphoma. Headed by WJLAs Kimberly Suiters, the investigation was born from a previous story where Suiters discovered that women with breast implants had higher suicide rates than women who did not.

In 2016, the World Health Organization classified breast implant-associated anaplastic large cell lymphoma (BIA-ALCL) as a new type of cancer. However, Suiters reported the U.S. Food and Drug Administration has not explicitly stated the implants cause lymphoma, even though the organization warned of an association in 2011 and 2016.

The station submitted a FOIA request to the FDA and discovered 441 related cases and at least 12 confirmed deaths.

The investigation featured Raylene Hollrah, a breast cancer survivor who had received the implants during reconstructive surgery. I did everything to keep cancer away, said Hollrah. Yet I put a device in my body that caused cancer.