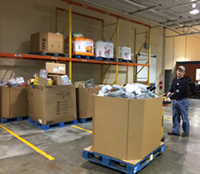 Raycoms CBS affiliate KFVS-TV Cape Girardeau, MO provided wall-to-wall coverage of a tornado that landed on February 28 and provided support in the aftermath. Damage occurred in the Missouri Bootheel and in Southern Illinois, with the worst damage occurring in Perryville, MO. Twelve people were injured. Approximately 40 homes were completely destroyed and more than 100 more were heavily damaged.

The next morning, KFVS began airing PSAs featuring our meteorologists on-location to promote Red Cross donations. KFVS also promoted the Heartland Cares Food Drive on March 3 - 5. More than six tons of food filled 25 pallets for the Southeast Missouri Foodbank and Salvation Army in Southern Illinois. The immediate response was overwhelming, that our detailed and accurate coverage was the main reason there were no more injuries or deaths, said Director of Marketing Paul Keener.

Your pinpoint accuracy of the devastating storm that hit Perry County saved lives. Families have told us your broadcast gave them the warning and time needed to seek shelter. Well done!

I would like to give a huge shout out to KFVS12Grant Dade and Brian McCormick did an outstanding job for many hours. Grant Dade was superb and the early warnings and predictions no doubt saved many lives! Thank you for your care, concern, and passion. As a public servant myselfI greatly appreciate your dedication to saving lives and taking your profession very serious!! Because of your excellent coverage my department and I were better able to protect our community, follow the coverage, and be ready for an immediate response. Kudos!"

KFVS, you possibly saved my 15 year old sons life. He received your weather alerts on his phone which prompted him to turn on KFVS weather. After seeing the tornado tracking, he sought shelter in a neighbors basement. Just as he reached their storm shelter, the tornado hit. Here is the after" picture of his dads home that he was in just minutes before the tornado blew through Perryville. Thank you KFVS!!!"