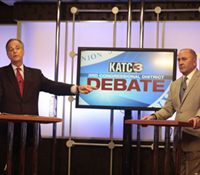 Cordillera Communications ABC affiliate Lafayette, La. aired and streamed a prime-time debate on December 8 between Republican Scott A. Angelle and Republican Clay Higgins, the candidates in the December 10th runoff for Louisianas Third Congressional District Seat. Voters could submit questions, in text or video form, by posting them on Facebook or Twitter with the hashtag #KATCDebate.