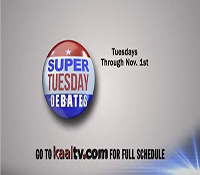 Hubbards ABC affiliate KAAL Austin, Minn. produced and aired the live, local Super Tuesday Debates series every Tuesday from September 13 - November 1 at 6:30 p.m. KAAL re-aired all of the debates on its digital channel for 24 hours on November 7 in order to inform the electorate about local races in advance of the election. The series covered every race from U.S. Congress to City Council.