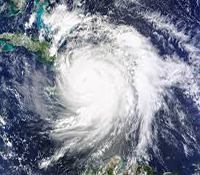 Hurricane Matthew swept through the southeast United States October 6-8 with winds topping 100 mph, affecting more than 20 million Americans and causing billions of dollars worth of damage. Two million residents of Florida, Georgia, South Carolina and North Carolina lost power and thousands were trapped in homes and cars. Local broadcast television and radio stations provided lifeline coverage during and after the storm, tracking Matthews path and providing information on outages, closures and shelters.

Graham Media Groups WJXT Jacksonville, Fla. provides a great example of how local stations prepared viewers and listeners, issuing for residents in evacuation zones to leave. We are committed to providing our viewers with information to keep them safe, said WJXTs Tracy Gaffney. KLOVE radio provided a dedicated feed to stations in dozens of towns and provided newscasts in Spanish.

Broadcasters in the Southeast received praise from listeners and viewers for their coverage of Hurricane Matthew. These e-mails were forwarded to Hearsts NBC affiliate WESH-TV in Orlando. Georgia Governor Nathan Deal publicly thanked a Savannah broadcaster for their around the clock, informative updates. Florida Governor Rick Scott also commended local stations for their coverage.

Broadcasters have been heavily involved before in preparing people for a storm, Florida Association of Broadcasters President Pat Roberts told Radio World. Theyve been involved in the response during the storm and hopefully have saved lives by telling people what to doTheir job during disasters is to be there and speak to their community. Florida broadcasters take that very seriously.