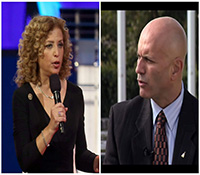 CBS owned-and-operated WFOR Miami held a debate between incumbent Debbie Wasserman Schultz and Tim Canova in the race for Floridas 23rd Congressional District on August 14. The hour-long debate was broadcast live during the stations Facing South Florida with Jim DeFede program. It will likely be the only race debate before the August 30 election.