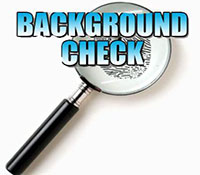 Cox Media Groups ABC affiliate WFTV Orlando investigated area schools background check process after a high school coach was arrested on a drug charge. The coach failed to disclose his criminal history years ago on his employment application, and was recently accused of running a multistate drug ring. The district didnt catch the issue until after the coach, Benjamin Jenkins, was allowed on the field and in classrooms after failing to disclose a misdemeanor drug arrest on his 2014 application, and no background check was performed.