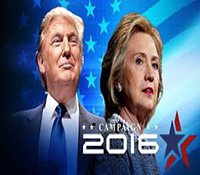 Twitter teamed up with CBS News to present the networks live stream of both the Republican and Democratic national conventions on the social sharing sites and apps. The stream, run by CBS News with their correspondents, ran "gavel-to-gavel" coverage on Twitter each day, in similar fashion to how NFL games and Wimbledon matches were streamed. The footage was "enhanced" with a running thread of live convention-related tweets.