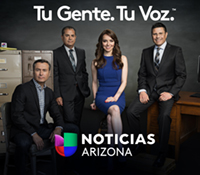 Univision Arizona and Univision New York offered community support after the Supreme Courts 4-4 ruling on US versus Texas on June 23, to determine whether President Obamas 2014 immigration relief programs can go into effect. They organized phone banks, town halls and clinics in partnership with the Arizona State Bar, MFV, The New York Immigration Coalition, the New York State New American Hotline, and Catholic Charities to provide up-to-date information about Deferred Action for Parents of Americans and Lawful Permanent Residents (DAPA) and Deferred Action for Childhood Arrivals (DACA). The DAPA and the expansion of DACA will not be implemented. Arizona saw more than 300 people attend the clinic and 130 families received one-on-one free legal advice from attorneys. New Yorks town hall had 600 people in attendance.