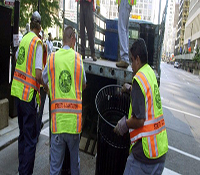 Meredith Broadcastings CBS affiliate WGLC-TV Atlanta aired Why Are Residents in DeKalb, Co. Paying Too Much for Trash Pickup? Investigative reporter Harry Samler discovered through a series of reports and inquiries by residents in the Atlanta-area that many residents are overpaying by hundreds, even thousands of dollars, for residential trash collection. One resident paid over $4,000 in trash collection bills because the city incorrectly designated her residence as a commercial building. After months of investigative work and dozens of cases of erroneous billing by localities for trash collection services, DeKalb county officials say they are considering administering refunds to residents who overpaid.