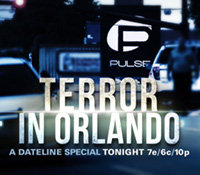 Broadcasting & Cable provided details on network television coverage of the massacre. The television networks main anchors - CBSs Scott Pelley, NBCs Lester Holt and ABCs David Muir also all flew to Orlando on June 12 to broadcast special evening newscasts. ABC sent six reporters to assist those already in Orlando, with NBC dedicateing four reporters to the story. Charlie Rose and Gayle King of "CBS This Morning" also broadcast from Orlando. Coverage in the days that followed included special editions of "Dateline NBC" and ABCs "20/20" that were devoted to the massacre.