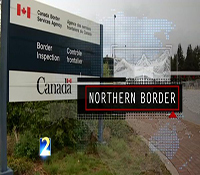 Cox Media Groups ABC affiliate WSB-TV Atlanta aired a report on May 9 on significant exposure along our northern border. The WSB crew traveled from the frigid Atlantic inlets and remote forests of northern Maine to the picturesque Pacific Coast, between which the border between the United States and Canada runs 4,000 porous miles. The team crossed into Quebec, Canada, from northern Vermont through a small rural checkpoint surrounded by fences and cameras. A few yards down the road, there are no fences or barriers of any kind. The only thing denoting the border is a small white marker.