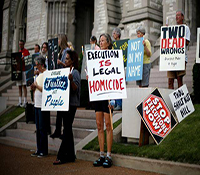 Media Generals NBC Affiliate KNS-TV Wichita aired KSN Investigates: The Death Penalty in Kansas on May 23. Reporter Brittany Glas found that since Kansas reinstated the death penalty in 1994, no one has been executed. Most of the 10 inmates on death row for murder were convicted more than 15 years ago, but no time table is set for the executions. The victims families are calling for the state to meet its obligations in these cases.