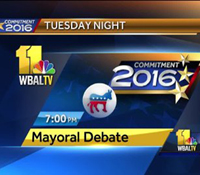 Hearsts WBAL-AM and NBC affiliate WBAL-TV Baltimore simulcasted an hour-long debate on April 12 between six Democratic mayoral candidates. The debate was also streamed live. "WBAL-TV is committed to making sure our viewers are able to make an informed decision at the polls during this important election year," said General Manager Dan Joerres