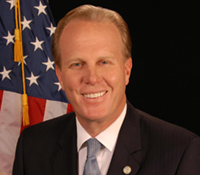 Three debates for San Diego mayoral candidates have been planned for incumbent Kevin Faulconer, Democrat Ed Harris and Independent Lori Saldaña. The debates are scheduled for April 12 on Univisions KBNT, May 23 on McKinnon Broadcasting-owned KUSI-TV, and June 3 on NBC-owned KNSD.