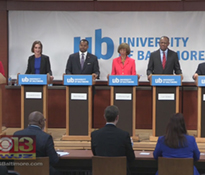 CBS-owned WJZ-TV Baltimore partnered with The Baltimore Sun and the University of Baltimore on several debates. Baltimores mayoral candidates debated on March 22 and 23. The Republican candidates for U.S. Senate faced off on March 23, with the Democratic debate occurring March 25. Reps. Donna F. Edwards and Chris Van Hollen, Democratic candidates for U.S. Senate, also participated in a debate that aired April 5 on the Larry Young Morning show on Radio Ones WOLB-AM Baltimore.