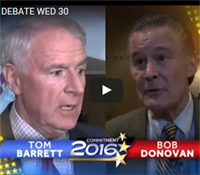 Hearst-owned ABC affiliate WISN Milwaukee and the Marquette University Law School to air debates between candidates in several races.They will produce and air the mayoral debate March 11; the statewide Wisconsin Supreme Court debate on March 15; the debate for Milwaukee County Executive aired on March 9. All events also streamed online and on the 12 News Mobile App.