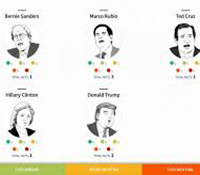 Univisions newly launched Detector de Mentiras (Lie Detector) during the March 9 Democratic debate to fact-check presidential candidates this election season. During that event, Detector de Menitras focused on the candidates statements on drivers licenses for undocumented residents, Hillary Clintons famous speeches to Wall Street and the auto industry bailout. In general, the fact-checking team will focus on issues that are important to the Hispanic community, such as immigration, education and health care. "Univision has been asserting itself as a significant player in investigative work over the past few years," said Al Tompkins of Poynter, who cited Univisions Rape in the Fields and Rape on the Night Shift.