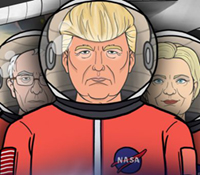 Univision premiered "Heads of Space," a satirical, animated web series based on the 2016 election, on February 16. The weekly episodes, available in English with Spanish subtitles, follow the adventures of candidates Donald Trump, Bernie Sanders, Hillary Clinton, Ted Cruz, Marco Rubio and Jeb Bush, who are sent to Mars by President Obama on a mission to ensure the survival of the human race before an asteroid destroys Earth. A robot named ROTUS pilots the spaceship and mediates conflicts between the candidates. HeadsOfSpace.com also features daily election news and infographics.