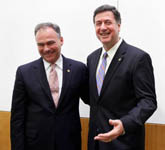 Virginia Democrat Tim Kaine announced he will particpate in eight broadcast debates preceding the general election for U.S. Senate. The debates will air on TV and radio stations across Virginia and will be held in geographically diverse regions. Kaine said he wants to work with Republican candidate George Allen so voters can hear from both sides. "George Allen looks forward to engaging in vigorous debates with Tim Kaine on their very different visions for Americas future," Allen spokeswoman Katie Wright said. The debates will be sponsored by a variety of organizations including, Radio One, Allbrittons WJLA-TV, NBC Televisions WRC-TV, Raycom Medias WWBT-TV, Commonwealth Broadcastings WCVE-TV, Media Generals WSLS-TV and Belo Corporations WVEC-TV.