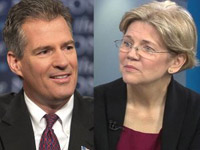 CBS Televisions WBZ-TV Boston announced a debate between U.S. Sen. Scott Brown and Democratic candidate Elizabeth Warren. The candidates have also agreed to another televised debate hosted by a consortium of media outlets in Springfield. CBS Radios WBZ-AM and Greater Medias WTKK-FM are working with the candidates to schedule radio debates. "It is of paramount importance that the people of Massachusetts be able to hear from both candidates for U.S. Senate," said Mindy Myers, Warrens campaign manager.