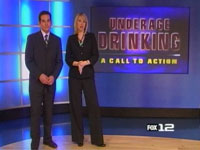 Nearly a third of Oregon eighth graders and half of 11th graders report drinking alcohol in the past 30 days. These alarming statistics spurred KPTV-TV in Beaverton, Ore., into action to reverse the trend. Working with the Oregon Partnership, a statewide nonprofit organization that works to promote the health of kids, the station launched a multi-platform community service campaign to prevent underage drinking. In addition to a series of news stories, the news team produced a half-hour special, "Underage Drinking: A Call to Action," which aired during National Alcohol Awareness Month in conjunction with town hall meetings. KPTV news anchor Wayne Garcia moderated the town hall meeting at Beavertons Sunset High School. The station also produced both broadcast and print public service announcements. The focus of all aspects of the campaign was on changing the future so alcohol use doesnt claim the lives and health of more teens.