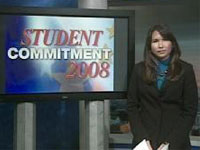 As part of its commitment to 2008 political coverage, WISN-TV in Milwaukee, Wis., asked students from Marquette University, the University of Wisconsin-Milwaukee and the University of Wisconsin-Whitewater to be political correspondents. The project, "Student Commitment 2008," involves six university advisers and 33 students currently studying journalism, political science and communications. The young journalists, who represent an important voting population in the 2008 elections, broadcast their work through several venues, including news reports, radio podcasts, blogs and videocasts on a student-driven political Web page on the stations site. Station staff meets with the students at least once a month. On February19, 2008, during the Wisconsin primary, the students added content to a live stream of WISNs coverage. "I love the multi-media aspects of this initiative," said Cheryl OBrien, a University of Wisconsin-Milwaukee senior in broadcast journalism. "We are the future in journalism, and this really gives us an opportunity to report the news, participate in the political process and hopefully make a difference."