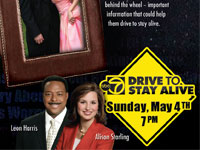 At the end of the 2006 school year, the viewing area of WJLA-TV in Arlington, Va., had lost more than three dozen teens to motor vehicle crashes. The station, local law enforcement and Northern Virginia chapter of Mothers Against Drunk Driving banded together to design a program about driving safety that could reach young audiences in a individual and lasting way. Now in its third year, "Drive to Stay Alive" has been presented to more than 25,000 young drivers at school assemblies. The 45-minute presentation is hosted by station anchor Leon Harris and medical reporter Kathy Fowler, herself a survivor of a deadly teen crash. Among its many components are a video report produced by the station chronicling teen driving behavior, a presentation by a local police officer about the 40 percent of teen crashes involving alcohol or drugs, Fowlers personal story of survival, a segment by WJLA reporter Horace Holmes who accompanied the Montgomery Alcohol Enforcement unit for a weekend as it pursued underage drinkers and a video memorializing local teens who lost their lives in crashes. A related one-hour primetime special aired on WJLA during prom season 2008 and was then distributed on DVD to high schools throughout the area. Currently, WJLA is in preliminary talks with the Maryland Highway Administration about plans to take the program statewide.