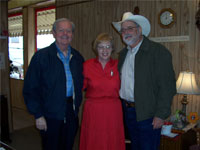 Co-host mother and daughter team Irene Robinson and Kelley Lovell of KWCL-FM in Oak Grove, La., did their part to help Louisiana voters go to the polls informed during the 2007 local elections. Their half-hour daily public affairs show, "Mighty Mess," hosted local candidates from judges to state representatives and provided them free airtime to address the public. The show also covered how to register to vote and early voting dates, and its hosts encouraged listeners to learn the issues and show up at the polls. The station plans to provide similar voter education outreach in upcoming elections. "We are small, but we are loud," said Robinson of KWCL, which is staffed by five people and located in a town with a population just more than 2,000.