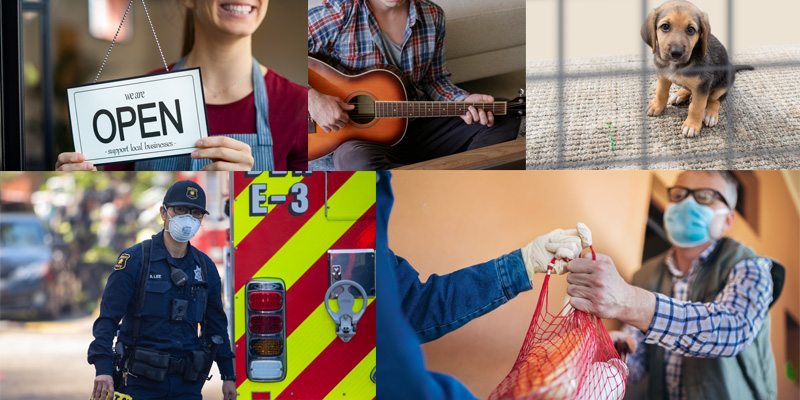 
Local radio and television broadcasters are dedicated to serving the public, and many are going above and beyond using innovative and creative ways to keep their listeners and viewers supported and informed as the nation faces new uncertainties every day.

When Las Vegas went into lockdown due to COVID-19, Beasley Media's KCYE found a unique way to give parents a little relief. The station's on-air personalities volunteered to take turns going live on Facebook each night at 7 p.m. for the Coyote Kids Book Club. Every night a different children's book was read to kids, garnering thousands of views and shares. The nightly feature became even more popular with the addition of several country music artists, who each read a book and performed a few songs during the Facebook broadcasts.

Stonecom Radio stations in Tennessee have partnered with Wilson Bank to launch the "Bank on Warnings Program" to sell radios to local residents at a reduced price. After a tornado struck the area in March, Stonecom knew they had to step in to support their community. "We take our commitment to weather coverage seriously," Stonecom president Larry Stone said. "We wanted to do something tangible to get radios on people's nightstands and vanities so they are prepared. It's another level of security."

The E.W. Scripps Company launched a new on-air and online initiative titled "The Rebound," which features stories and resources for people and businesses affected by the coronavirus pandemic.

Over two weekends in April, Big River Broadcasting in Florence, Ala., in partnership with the Muscle Shoals Music Association, supported local restaurant workers and musicians with "Operation Drumstick." The initiative led to nearly 700 pounds of chicken and a portion of funds raised through the sale of 1,000 cases of chicken to be donated to local restaurant workers and area musicians. The funds collected from the sale of chicken are also being used to create a community garden to supply them with fresh produce this summer.

Hearst Television's WPTZ and WNNE raised $56,585 for the Vermont Foodbank in early May. The response from the community was unprecedented throughout each day of the drive, with individual donation amounts ranging from a few dollars to several hundred dollars and numerous donors giving donations of over $1,000.

All seven Hubbard Radio West Palm Beach stations donated airtime throughout the month of May to two local animal shelters to promote the "Feed the Hungry" campaign and collect lifesaving food, medicine and supplies for shelters dealing with loss of resources and volunteers during the COVID-19 crisis.

Beasley's WMMR-FM, WMGK-FM, WBEN-FM, WXTU-FM, and WPEN-FM unveiled on April 20 a line of "Philly Stands Together" merchandise to benefit the PHL COVID-19 FUND, a joint venture between Philadelphia Foundation and The United Way of Greater Philadelphia and Southern New Jersey. The Fund provides grants to local organizations to serve the most vulnerable in the community.

KSAT Fundraises for The Children's Shelter

Mid-West Family Stations' WITI-TV Milwaukee is leading an effort to provide food to first responders fighting the pandemic in southeast Wisconsin. The "Feed A Hero" program centralizes a list of health care organizations and instructions for how to deliver food to them.

Radio stations from around Wisconsin united with a social media effort to raise the spirits of Wisconsinites during the COVID-19 pandemic by airing "Jump Around" on Saturdays at 3 p.m. "Jump Around" by House of Pain is traditionally played for the crowds at Camp Randall between the third and fourth quarter at Wisconsin Badger football games. iHeartMedia estimates more than 43,000 people have joined in during the airing of the song.

Your local broadcasters are on the front lines providing critical support to their communities, even as they struggle from a steep decline in advertising revenue. Read more stories about broadcasters' public service at BroadcastPublicService.org.