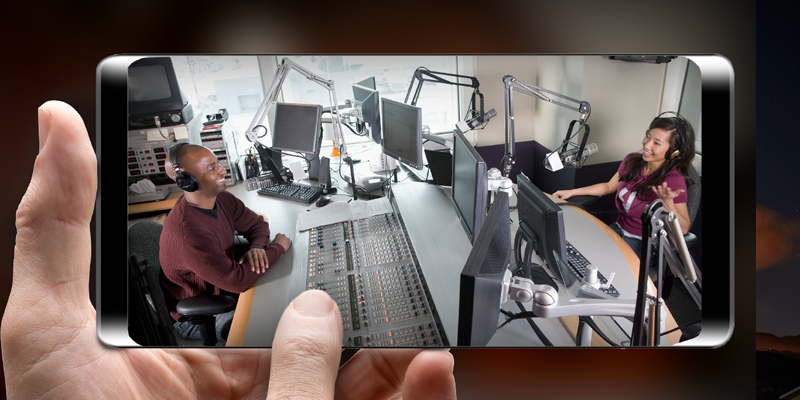 Did You Watch the Radio Last Night?

What started out as a webcam experiment six years ago has evolved into a fully functioning mini- television station for Bonneville International’s KSL News Radio team in Salt Lake City. In addition to listening to their favorite radio talk shows, thousands of community members monthly now watch them as well on the KSL website, mobile app and social platforms. The visuals range from live coverage of natural disasters to footage of radio DJs in the studio as they record their shows. The station also produces a number of videos in addition to audio podcasts as part of the initiative.

We talked to KSL News Radio’s Sheryl Worsley, director of audience development, and Jon Accarrino, executive director of business development, about Radio You Can See and how it’s shaking up the broadcasting world.

Why did KSL News Radio decide to launch Radio You Can See?

Jon: There are video screens around us now more than ever in history. For us, delivering an audio-only experience on these screens felt incomplete. There’s a lot of video streaming consumption in Salt Lake City, so we decided to focus on the Radio You Can See strategy and take advantage of that tech-savvy audience. We wanted to take radio, which is typically only listened to in the car, and bring it back into the home. We did that by adding a visual element to traditional radio broadcasts, and in the process, we raised the bar and redefined what’s possible for a radio station in the age of smart phones and connected TVs.

You also can’t do something like this without a revenue strategy. “Because of the variety of different platforms viewers can watch Radio You Can See on, we’re able to monetize it in a number of different ways.” It’s really helped to strengthen our station.

What’s the difference between Radio You Can See and Television?

Sheryl: Because we’re a radio station not a TV station, we are a little more nimble. What radio is really good at is timeliness. We are live and local from 5 a.m. to midnight and we actually have people in the building 24/7, so we can jump on something that’s breaking much more quickly than a television station.

Jon: Local TV stations normally only broadcast at few times during the day. Radio, on the other hand, is live, instant and constant. Radio You Can See is ready to break news and talk about anything that’s happening live, while TV is preparing for a newscast.

What sort of response have you received from the community?

Sheryl: It’s been overwhelmingly positive. When our community was battling wildfires, we received feedback from viewers thanking us for showing them exactly where the fires were burning. They said it was the only way they had access to that vital information.

With Radio You Can See, we can now show that wildfire burning near homes in a way we couldn’t before. We can now explain that wildfire to people in ways that we could not before with solely audio.

KSL has roughly 70 podcasts, has this extended your audience?

Sheryl: We have a wide range of podcasts, including ones with video content, that touch on very specific and unique areas from a sports podcast hosted by an actual NFL player to a fictional Sci-Fi podcast about aliens and multiple personality disorders. It’s very much about niche podcasting. So, when we’re live on the radio, we’re targeting a mass audience and trying to get as many people across a wide range of topics as possible. Podcasting, however, is about that specific area of passion from person to person.

Jon: The podcast secret to success is targeting very niche audiences. Broadcasting succeeds when it collects the largest audiences, but with podcasting you want to go after a very specific audience. We’ve grown our podcast library with these select listeners and, in the process, appeal to advertisers trying to reach these niche audiences.

We’ve found that our podcasts and our broadcast products might only have a 20 percent overlap. So, our podcasts are reaching out to a whole new audience that would normally not listen to broadcasts. We’re still connecting with our community, informing them and telling their stories while also reaching new generations and evolving with their consumption patterns. It’s great for us and it means we’re growing.

Learn more about the ways local broadcasters are innovating to better serve you at nabpilot.org/InnovationStories.