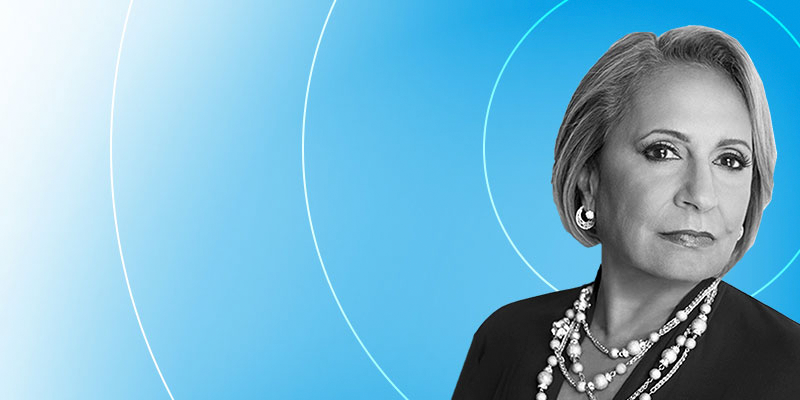 As radio celebrates its centennial year in 2020, we are looking back at the pioneers that have shaped this incredible industry, including trailblazers, like Cathy Hughes, who have paved the way for a new generation of radio leaders. Share your own radio story using #Radio100.

If you turned on the radio in 1975, you’d probably hear “Love Will Keep Us Together” by Captain and Tennille or Frankie Valli’s “My Eyes Adored You.” But not on WHUR during the late-night hours.

That year, Cathy Hughes, the general manager of Howard University’s radio station, invented the “Quiet Storm” radio format — a late night show featuring a mix of rhythm and blues, soul and jazz, often hosted by a DJ with a soothing, baritone voice. The format quickly grew in popularity, becoming a mainstay on more than 480 stations across the country.

Their new format filled an entertainment gap. Until it launched, there wasn’t a radio format geared towards young, black singles.

“It caught on like wildfire,” Dyana Wiliams, who worked at WHUT at the time, told the Virginian-Pilot a few years ago. “Name a city where there were black folks, and there was a Quiet Storm format.”

From inventing the Quiet Storm format to providing a platform for black on-air and musical talent, Hughes has made what African American audiences want to hear her No. 1 priority throughout her long and storied career. Today, she is the founder and chairperson of Urban One, the largest African American owned and operated broadcast company in the country. She also regularly presents at the historically black Howard University, educating and empowering the next generation of African American broadcasters.

African-Americans currently own a controlling stake in more than 217 radio stations across the U.S. Hughes is working to increase that number through her work at Howard University, which named its broadcast school after her in 2016.

Each semester, Hughes presents to a group of 100 students, giving them the tools and knowledge, they need to thrive in broadcasting.

“Teaching is my favorite job. Whether it’s interns at Urban One or students at Howard, I enjoy working with young people,” she said. “They’re our future.”

Last year, Hughes was inducted into the National Association of Broadcasters’ Hall of Fame in recognition of her accomplishments.

“I feel that I was truly blessed because ever since I was eight years old, I knew I wanted to be in this industry,” Hughes said, “Now, I try and inspire young people to not just want to work as broadcasters, but to become station owners as well.”

In 1980, Hughes purchased Washington, D.C.’s WOL-AM, turning it into the first U.S. station to offer 24-hour all-talk programming from a black perspective. The station’s slogan, Information Is Power, underscored her belief that delivering news and information to all audiences is critical.

Even though D.C.’s population was nearly 80% African American in the early 1980s, the station didn’t catch on quickly with listeners or advertisers.

“It was new, novel and controversial,” Hughes said, “Never before had the black community had the opportunity to express their opinion 24/7.”

The station wasn’t profitable in the early years and Hughes had a hard time paying off debt. Lenders encouraged her to give up the all-talk format and shift towards the less-expensive music format. Hughes rejected their ideas and embraced research showing that D.C.’s black community was underserved by existing talk radio stations.

Finally, a lender jokingly suggested to Hughes that she begin hosting a radio show to cut costs.

“As soon as he said it, I thought, ‘Bingo!’ A light just went off in my head,” Hughes said.

She took over as host of the morning show and remained in that position for 11 years. Hughes became a popular show host, helping to the boost the station’s ratings.

“It was the most incredible experience,” she said.

After the station had been on air for seven years, WOL became profitable and Hughes purchased a second station, WMMJ, which she converted to a rhythm and blues station. Hughes’ ownership group, Radio One, today known as Urban One, went on to purchase more than 50 radio stations in major cities. Each station broadcasts with an African American audience in mind, showcasing black artists and DJs.

“Having diversity in media is critical and necessary. We’re not a monolithic society,” Hughes said. “As broadcasters, we have to serve all audiences.”