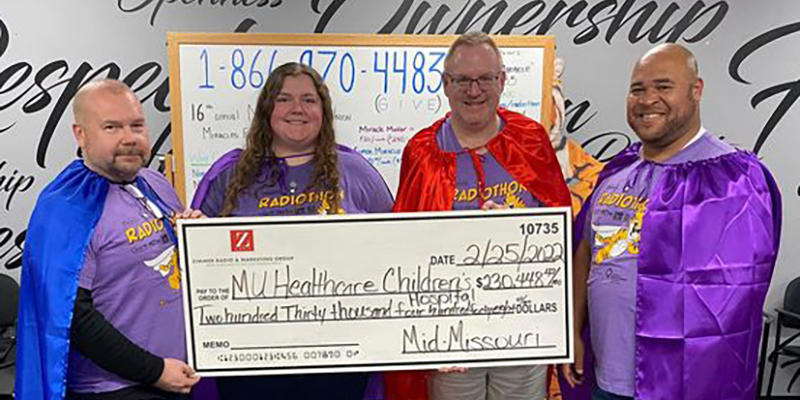 Also this month, Beasley Media Group’s Praise Network in Detroit, Mich., raised more than $67,000 for St. Jude during their radiothon. “My heart is bursting for joy for the kids and families at St. Jude,” said Program Director and Personality Randi Myles. “The radiothon is one of the highlights of my year because I am able to see and hear the generosity of our Detroit listeners.”

In February, Connoisseur Media’s 99.9 Free Country in Frederick, Md., raised more than $400,000 for St. Jude. “Our entire staff gave 110% over the course of two days, pouring their hearts and souls into this year’s event, because the need is so great and the kids are so special,” said Program Director Andy Webb. “St. Jude won’t stop until no child dies from cancer, and the Frederick area came through in a big way to aid in that fight.”

In addition to supporting St. Jude’s national work, local stations have the ties in their communities to meet the unique needs of children’s hospitals in their hometowns. They raise funds for equipment and supplies, participate in events and collect gifts and donations for children fighting life-threatening illnesses.

Earlier in March, Alpha Media’s DJX 99.7 in Louisville, Ky., raised more than $100,000 for Norton Children’s Hospital during a 24-hour radiothon. The station shared stories from families served by the hospital over the air and online via a podcast. Katharine Staggs described her experience giving birth to a baby boy with a heart defect in the hospital: “It was terrifying. Norton’s walked us through that entire process, and they basically held our hand and let us know everything was going to be okay. They literally gave our son his life back.”

Across the country and all-year round, broadcasters are raising funds and support for children’s care.