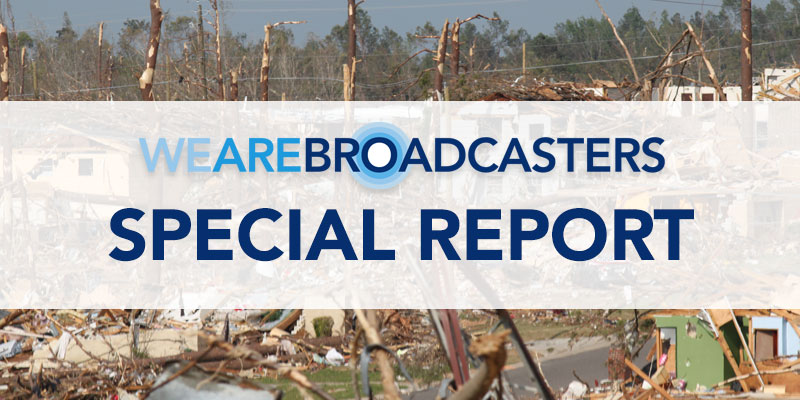 In times of crisis, Americans turn to their local radio and television stations for the most trusted news to stay safe and informed. America’s broadcasters have been at their best during the COVID-19 pandemic, providing fact-based journalism, breaking news, vaccine education and supporting local businesses.

Tornadoes devastated several states in the Midwest and South last weekend, leaving at least 88 people dead, including more than 70 in Kentucky. Broadcasters sprang into action with life-saving emergency information and news coverage of the aftermath, and during recovery, local stations continue to lead fundraising and donation drives. These are just a few examples.

Going Behind the Scenes of Wall-to-Wall Coverage

Saga Communications’ Jonesboro, Ark., Market Manager Trey Stafford spoke to Radio Ink about the group’s wall-to-wall coverage of the tornadoes. “We flip a switch and deliver simultaneous audio across our six stations once we have a tornado warning in our immediate area,” he said. “We had at least three stringers out in the field and a professional storm chaser all providing active storm coverage and damage reports. As horrible as it was, it was a beautiful illustration of how local radio is supposed to sound.”

After the emergency coverage, the group has turned their attention to recovery. “During our storm surveys on Saturday it became clear that many families had lost Christmas,” Stafford said. “We saw a need to help Santa replace what had been bought for the kids.” They immediately planned a toy drive to collect and distribute toys before Christmas.

Poynter interviewed reporters and photojournalists on the ground in Kentucky about their experiences covering the storm and its aftermath. One reporter, Telemundo’s Rogelio Mora-Tagle, brought his experience covering hurricanes in Miami to the disaster coverage. “I so want to do these people a service, and I do see this as a service,” Mora-Tagle said. “I approach this job thinking, ‘What can I do? What can our viewers do for them?”’

Trent Okerson, meteorologist at Paxton Media Group’s WPSD Local 6 in Paducah, Ky., took Poynter minute-by-minute through the station’s coverage. Coverage begins days in advance and relies on the latest technology and a team at the station as well as Okerson’s expertise. “You would expect as much from a newsroom that is decorated with posters of the U.S. Constitution, the Bill of Rights and the First Amendment,” says Poynter.

Local stations provide a connection between elected officials and their constituents. Hearst Television’s WLKY Channel 32 Louisville, Ky., was on hand as Kentucky Governor Andy Beshear toured tornado damage in Bremen, Ky. "We want to hear about every single challenge you're facing and if there's anything we can do, we will do it and if not, we will find somebody who will get it done," Beshear said.

After the storm, viewers reached out to thank WLKY for their extensive coverage. These comments were left on Facebook:

“WLKY saved so many people through this storm with their warnings and updates! It doesn’t go unnoticed!”

“Thank you for being such a reliable and committed meteorologist to our community! I feel much safer when I watch you during scary stormy times! You stay on and cover all the bases... keep up the great work and remember you are appreciated!!!”

With wide reach and deep roots in their communities, local TV and radio stations are uniquely positioned to disseminate information about donations and fundraisers to support the victims. Gray Media’s WAVE 3 News in Louisville, Ky., is one example, maintaining a continually updated list of organizations accepting donations and providing relief to tornado victims.

Scripps’ LEX 18, Lexington, Ky., raised more than $3 million for tornado victims in a telethon with the University of Kentucky Athletics department Tuesday. “We will continue to find ways to help rebuild, restore, heal and return stronger than before," said Mitch Barnhart, UK Director of Athletics. "Our hearts extend this hope and promise to the people of Western Kentucky.”

WHAS Reports on Food and Supply Donations from Local Organizations

TEGNA’s WHAS11, Lexington, Ky., interviewed local restaurants donating food and other supplies to families who are “starting at zero” after losing all their possessions in the tornadoes. “When it gets down to it, Americans help each other,” said Troy King, owner of Six Forks Burger Company. The report provides information for viewers who would like to make their own donations as well.

Poynter spoke to WPKY personality Tess Cowen and station owner Beth Mann about the role their local radio stations can play in providing support and emergency relief to the small community. “We are community stewards,” Mann said. “We will connect the dots for people. We will help the government agencies tell people what is going on and we will help people find what they need to rebuild. In times like these, a local radio station can bring a community together.”

FOX Corporation, the parent company of FOX Broadcasting Company, will donate $1 million to the American Red Cross for tornado relief. "Those dollars are going to help people in Kentucky recover," said American Red Cross official Brad Kieserman. " Thanks to your generosity, and that of so many other donors, we’re going to be sheltering, feeding and comforting folks from all over Kentucky. So thanks to you and FOX very, very much."