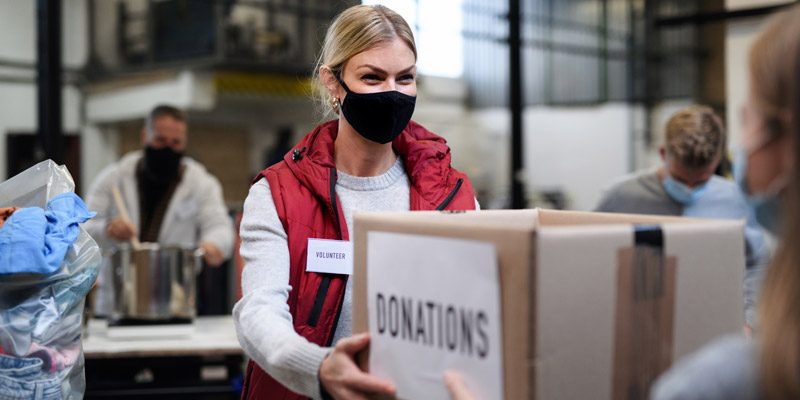 In times of crisis, Americans turn to their local radio and television stations for the most trusted news to stay safe and informed. America’s broadcasters have been at their best during the COVID-19 pandemic, providing fact-based journalism, breaking news, vaccine education and supporting local businesses.

Every year, local television and radio broadcasters play a leading role in supporting their communities during the holiday season. They help those in need by hosting fundraisers, holding toy drives and promoting local charities and organizations.

Audacy’s 94.9 The Point in Virginia Beach, Va., raised over $220,000 during its 20th annual radiothon to benefit Children’s Hospital of The King’s Daughters in Norfolk. Morning show hosts Mike Powers and Woo Woo broadcasted live from the station’s studio November 10-12 to raise critical dollars for the region’s only children’s hospital. Listeners learned what makes a children’s hospital unique and heard stories of strength and resilience from patients and their families.

WXMX-FM Raises Over $533,000 for Ronald McDonald House Charities of Memphis

Cumulus Media’s 98.1 The Max in Memphis, Tenn., held its 31st annual radiothon on November 5 and raised $533,435.01 in less than 12 hours for Ronald McDonald House Charities® of Memphis. The organization offers children with pediatric cancer and other catastrophic illnesses undergoing treatment at St. Jude Children’s Research Hospital and their families a nurturing, family-centered residential community. The radiothon is the largest annual fundraiser for Ronald McDonald House Charities® of Memphis.

iHeartMedia’s KAT 103.7 serving Omaha, Neb., highlighted the Project Santa toy drive to benefit Open Door Mission. Project Santa provides toys to needy boys and girls so they can have gifts to open on Christmas morning. Listeners were encouraged to drop off toys such as board games, puzzles and sports balls at local sponsor locations.

Connoisseur Media’s 930 WFMD Free Talk of Frederick, Md., held its annual “Christmas Cash for Kids” fundraiser November 29-December 3. The station worked with the Salvation Army, a local Frederick bank and many other businesses and organizations to raise money to provide local children a Christmas they would otherwise miss. All funds raised are spent in Frederick County stores.

E.W. Scripps Company’s KTVH in Helena, Mont., promoted the start of The Salvation Army’s Red Kettle Campaign to raise funds for local programs. This year, Helena’s Salvation Army set a goal to raise $100,000. “The money stays locally here in Helena. It doesn't go anywhere else; it stays locally in our fund that goes into our food pantry, our social service offices, our transitional living homes that we’re running, our recovery programs, those places. All of our programs benefit from the funds that we raise here,” said Corps Officer Major Brian West.

Graham Media Group’s Click2Houston in Texas highlighted the annual “Color Box” toy drive sponsored by CoolxDad, an organization that provides a network for fathers of color throughout the Bayou City and works to challenge stereotypes about men of color and their presence in children’s lives. Five local businesses participated by displaying a distribution box for patrons to drop off donations through November 30. The donations will be given to children through Big Brothers, Big Sisters.

Nexstar Media Group’s 17 News Bakersfield, Calif., teamed up with the Boys and Girls Club of Kern County and the Bakersfield Homeless Center to hold the “17 Days of Christmas” toy drive. Viewers were encouraged to drop off donations for kids of all ages, including teenagers, at all three locations from December 1-17.

Sinclair Broadcast Group’s CBS 6 serving Albany, N.Y., encouraged viewers to adopt a wish this holiday season with Make-A-Wish Northeast N.Y. Stars featuring one of this year's wish ambassadors were available for purchase for $5, and monetary donations were also accepted on the Make-A-Wish website. The station hosted a telethon on December 2 for viewers to call in a donation during a live phone bank.