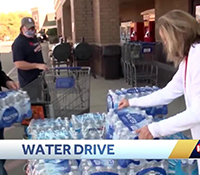 The water crisis began during Februarys historic ice storm and sub-zero temperatures, leaving a large portion of the city without water for nearly a month.

Its times like these that Mississippi generosity shines more than ever, says Mike Neelly, WAPTs general manager, and our community surpassed all expectations with an incredible display of giving.