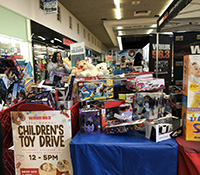 Without WHUR, the holidays would be very bleak for hundreds of children. We are truly thankful that WHUR steps up to the plate every year to make sure the holiday season is joyous for our children, said Denise McCain, Director of the Prince Georges County Family Justice Center, a non-profit supporting victims of domestic violence and sexual assault.