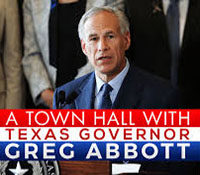 As one of the nations largest local media companies, Nexstar remains committed to supporting the evolving needs and interests of the local communities that we proudly serve in Texas and across the United States, stated Nexstar President Tim Busch. Town Halls provide an important public forum for constituents to engage with local leaders on the issues that matter to them and their families.