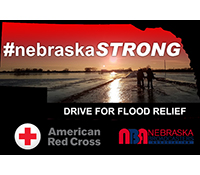 We tell stories that connect us and provide a pathway to help those in need throughout our viewer and listening areas, from all across Nebraska and into western Iowa, said Chairperson of the NBA Board of Directors and KETV President / GM Ariel Roblin. From lifesaving storm coverage to fundraising hundreds of thousands of dollars for relief and recovery, we come together for a stronger Nebraska.

Susanne and I also want to thank the Nebraska Broadcasters who have led this effort and done an incredible job of helping keep people safe throughout the flooding, said Governor Ricketts.