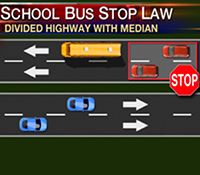 TEGNAs NBC affiliate WXIA Atlanta published a story on February 17 explaining that Georgias governor signed legislation to fix a school bus safety law that unintentionally allowed drivers on some roads to pass school buses that were stopped to load and unload kids. WXIA had investigated more than 100 instances where local school bus drivers were caught on camera breaking laws related to the use of the bus safety arm. Violations occurred across multiple counties between May 2014 and January 2019.