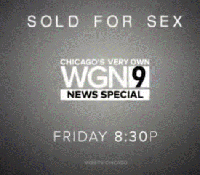 Tribune-owned WGN Chicago aired Sold for Sex: A WGN News Special on January 25 to show how sex trafficking affects people of all races, religions and neighborhoods. WGN shared stories of teens who were offered shelter while they were living on the streets, only to find that their protectors were sex traffickers. One survivor had been sexually abused since the age of three. She ran away at 12 and into the house of a trafficker.

WGN also showed how the opioid epidemic and sex trafficking overlap through the story of a mother who repeatedly chose crack cocaine over her daughter. During the special, a Cook County Sheriff shared the locations most recently discovered to harbor sex trafficking and how law enforcements focus has changed.