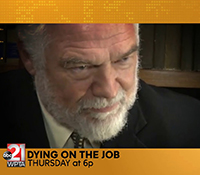 Quincys ABC-NBC affiliate WPTA Fort Wayne, Ind., aired an investigative series, Dying on the Job, in December and January. The series focused on 23-year-old Shacarra Hogue, who died after her employer intentionally disabled safety features on the equipment she operated. After the company was fined only $6,300, WPTA reviewed every safety order issued by the state over six months and found that companies often pay small amounts for serious and repeated code violations. The stories inspired legislative reforms.

Your story was very moving to me, State Rep. Martin Carbaugh. [It] hit me in the heart, and also made me pretty frustrated.

Quite frankly, if you hadnt brought it to our attention, we might not be aware that we havent made changes in some time, State Sen. Liz Brown (R-Fort Wayne).