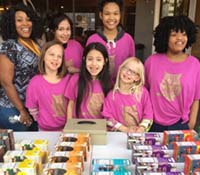 Bonnevilles KIRO-FM Seattle won a Murrow award for its story Homeless Girls Join Their First Girl Scout troop at Marys Place. Marys Place, a Seattle homeless shelter, hosts Girl Scout meetings on Wednesday nights, providing many girls with their first opportunity to participate in scouting. The troop welcomes girls of all ages, from four to 18. A 13-year-old scout said that through the troop, she has learned to be kind, respect others and to refrain from bullying. Kids just want to have a sense of normal, said Tanita Horton, one of the troops leaders. I think that this certainly brings some of that to them. Listen to the story here.