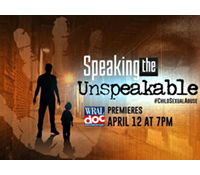 Capitol Broadcastings NBC affiliate WRAL-TV Raleigh aired on April 12 a documentary, Speaking the Unspeakable, that tells the story of two men who experienced sexual abuse as children in North Carolina. Speaking the Unspeakable covered common themes in child sexual abuse, the guilt and shame many survivors feel, the fear of speaking out, and manipulation from abusers. Knight Chamberlain was nine years old when a stranger sexually assaulted him. A Catholic priest sexually assaulted his stepbrother, Michael, when he was 11. Speaking about their experiences has helped them heal.