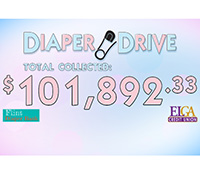 In the most populated county in the stations DMA, 4,500 children under the age of three live below the poverty line. Because state and federal assistance cannot be used to buy diapers, many of these children are forced to stay in the same diaper for days at a time. During the ABC12 Diaper Drive, the station reported live during the days newscasts and broke into programming to show people bringing donations of money and supplies. One of the stations news anchors helped start the initiative 10 years ago, and eventually became a co-founder of the Flint Diaper Bank, a non-profit organization with no administrative costs. With the help of the initiative, the Flint Diaper Bank now helps deliver one million diapers to families in need each year.