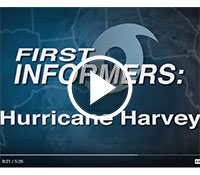 In August 2017, Hurricane Harvey struck the Gulf Coast, primarily the Houston area. As Harvey approached, radio and television broadcasters took to the airwaves to warn those in the storms path about the oncoming danger. During the storm, local broadcasters provided lifeline support as first informers, relaying emergency and disaster relief information. And after the skies cleared, radio and TV stations played a critical role in the recovery and rebuilding efforts of their hometown communities.

These feats of courage, dedication and generosity demonstrated by local radio and TV broadcasters are captured in this short film produced by Media Arts Professor Scott Hodgson and his students at the University of Oklahoma, and Chandra Clark, professor of Journalism and Creative Media, and her students at The University of Alabama.