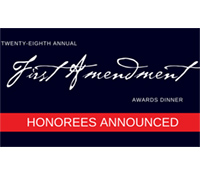 The Radio Television Digital News Foundation (RTDNF) announced on January 16 its First Amendment Awards winners, who will be honored on March 8. Through our First Amendment Awards, we shine a light on individuals and news organizations who seek and report the truth ethically and responsibly, said RTDNF Executive Director Dan Shelley. The 2018 honorees include NBCs Meet the Press, CBS News David Rhodes, ABC News Robin Roberts and industry leader Gretchen Carlson.

First Amendment Award  NBCs Meet the Press
"Meet the Press," moderated by NBC News political director Chuck Todd, is the longest-running show in television history, with 70 years on the air. The show spotlights how Washington decision-making impacts Americans across the country. It was the number one most-watched Sunday public affairs show for the 2016-2017 season, reaching more than three million viewers weekly and millions more through social, digital and on-demand platforms.

First Amendment Service Award  David Rhodes, CBS News
This award honors professionals in local or network news who work in a management or largely behind-the-scenes capacity. Rhodes oversaw the creation of CBS This Morning" in 2012, which has more than a million daily viewers. In 2014, Rhodes launched the streaming video news channel CBSN. He has twice been named to Fortune magazines 40 Under 40 list and to GQs 50 Most Powerful People in Washington.

Lifetime Achievement Award  Robin Roberts, ABC News
Robin Roberts is co-anchor of ABCs Good Morning America. Under her leadership, the show has won five Emmy Awards for Outstanding Morning Program and the 2017 Peoples Choice Award for Favorite Daytime TV Hosting Team. Her numerous awards include the Walter Cronkite Award for Excellence in Journalism. She was voted the Most Trusted Person on Television by a Readers Digest poll in 2013.

First Amendment Leadership Award  Gretchen Carlson
This award is presented to a business or government leader or other individual who has made a significant contribution to the protection of the First Amendment and freedom of the press. Gretchen Carlson is one of the nations most successful and recognized news anchors and a tireless advocate for workplace equality and the empowerment of women.