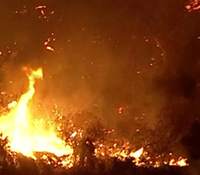 Wildfires devastated southern California in early December 2017, with fires spreading to about 31,000 acres in about nine hours. As the fires raged, local radio and television stations provided lifeline coverage of the event. You could breathe that smoke coming through the air vents. Youd feel like if you were to cough you would be coughing ash, Traffic Reporter Mark Kono of Tribunes CW affiliate KTLA told The New York Times. But if we can get the shot, well do it. The New York Times further described the harrowing experience of KTLA and Entercoms KNX-AM reporters here.