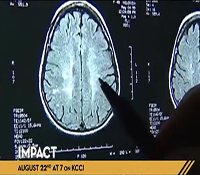 Hearsts CBS affiliate KCCI-TV Des Moines earned an Emmy Award from the Upper Midwest Chapter of the National Academy of Television Arts and Sciences for its sports special Impact: Concussions, CTE, and the Fight To Save Football. Of the over one million students who play football in the United States, an estimate 20 percent suffer a concussion, which often goes undiagnosed. The special explores the effects and what is being done to make the game safer.