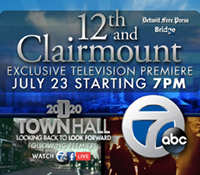 Scripps ABC affiliate WXYZ-TV Detroit aired a documentary commercial-free on July 23 called 12th and Clairmount about the 1967 Detroit riot. WXZT, The Detroit Free Press and Bridge Magazine collaborated to produce the documentary, which features WXYZ archival film on the five-day rebellion and highlights the racial and economic tensions that led to the uprising. In the week prior to the airing, WXYZ presented daily special reports on the uprising in the 5 p.m. newscast. Its so important that we reflect on the past and learn from those experiences if were going to move our community forward, said General Manager Mike Murri. Improving our community is core to our mission at WXYZ and the mission of our Detroit 2020 project  to unify our region and inspire people to act.