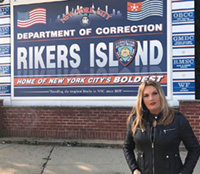 Fox-owned WNYW-TV New York City examined life at Rikers Island in a half-hour special report, Street Soldiers with Lisa Evers, on June 23. Reporter Lisa Evers hosted the town hall at the controversial correctional facility to look at the impact of new programs meant to rehabilitate 18 to 21-year-old inmates, many of whom were arrested for the first time and awaiting resolution of their cases. The program gave inmates, correction officers and program providers the chance to speak about their experiences.