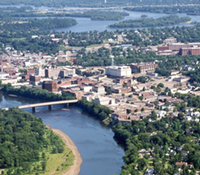 Local television stations in Eau Claire, Wis., provided critical coverage during a May 13 tornado that killed one person, injured others and caused millions of dollars in damage. A trailer park was destroyed, leaving dozens without homes. Gray Televisions WEAU-TV Creative Service Director Andrew Felix offered TVNewsCheck an account of WEAUs live warnings, three hours of nonstop coverage and promotions for a fundraiser held in the aftermath. One viewer later said, I was watching you guys [at WEAU] faithfully there, and you kept saying to take cover, so I did.

Quincy Medias ABC affiliate WQOW-TV also provided continuous live coverage of the tornado onair and via social media. They reported live from the destroyed trailer park, aired a video of the tornado submitted by a viewer and produced a 30-minute prime time special after the storm. We were pretty proud of it. Were a small station, with a small staff, News Director Dan Schillinger told TVNewsCheck. But our team rose to the challenge of covering a disaster and performed like big-market pros.