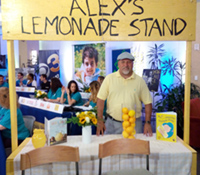 Alexs Lemonade Stand Foundation evolved from four-year-old cancer patient Alexandra Alex Scott, who held a lemonade stand in 2000 to raise money to help find a cure for childhood cancer. The annual Lemonade Days, when thousands of volunteers across the country host lemonade stands to fundraise.