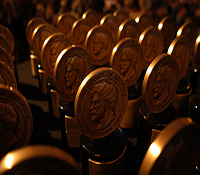 Dispatch Broadcast Groups NBC affiliate WTHR-TV Indianapolis became the first local television station to be honored with two separate Peabody Awards in the same year. The station was honored at an event on April 25 for Charity Caught on Camera, an undercover investigation that exposed mismanagement at an Indiana charity, and Dangerous Exposure, which discovered lax oversight by environmental regulators. The investigations are WTHRs fourth and fifth Peabody Awards.